Lithuanian literature and its history 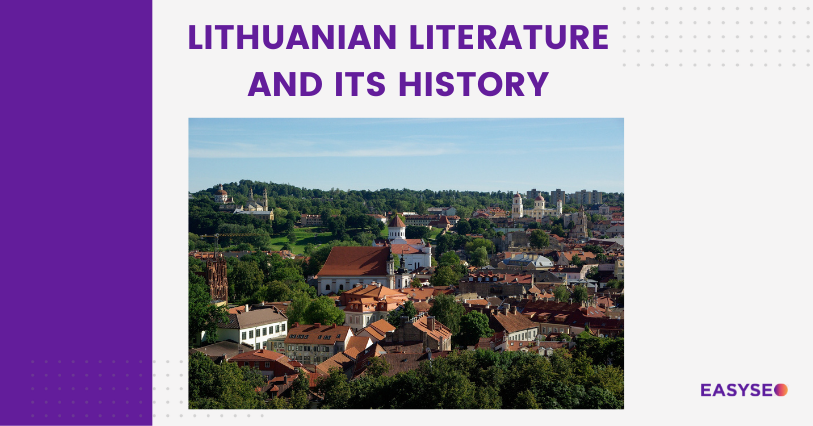 Lithuanian literature, since the earliest writings, has been an important factor in maintaining the identity of the Lithuanian people in various times.

Even though most early works were written in Latin, as it was common during the middle ages, they certainly helped shed light on the politics, culture and other aspects of the country’s life at the time.

Since then, the country’s literature took on many shapes and forms, helping preserve the Lithuanian identity in the face of various crises.

In this article, we will talk about the key points of the development of Lithuanian literature and how the language has changed its role in recent years.

Nowadays, copywriting services for Lithuania are becoming more and more popular since the digital business industry is growing and the importance of linguistic content is more and more apparent.

If you’re looking for such services, consider hiring our agency!

The Lithuanian language in itself, is one the oldest languages in the world period. Said to derive from the Indo-European group of languages, it has retained its grammatical and phonological features since ancient times, being quite similar to Sanskrit and Ancient Greek languages.

This is amazing in itself, however, arguably the more fascinating journey of the language is its survival story. In the face of many cultural influences, political factors and even occupations, the Lithuanian language survived intact, often against very unfavorable odds.

First of all, there were the middle ages. King Mindaugas, for example, the sole King of Lithuania often used latin in his letters to communicate with other lords or foreign rulers. The same trend continued with dukes Gediminas and Vytautas, one of the most important political figures of Lithuania, period.

As the 16th century loomed and foreign threats became more and more apparent, the Duchy of Lithuania chose to join the Polish in a two-state commonwealth that would exist up until the end of the 18th century.

During this period, Polish influences were very strong as the only officially recognized language by the state was Polish and Latin. Many of the higher ups or parliament members of Lithuanian origin often spoke Polish as well.

As the start of the 19th century approached, the commonwealth of Lithuanians and Poles was no more. Weak rulership and corruption lead to the partition of the country to three major players at the time: Austria, Prussia and Russia.

The territory of modern Lithuania became part of the Russian empire and as for the language, after centuries of Polish influence, the Russian language took over the same role. Miraculously, the language continued to survive by being commonly spoken amongst the peasant population.

Thanks to the patriotic authors like Motiejus Valančius, Antanas Baranauskas or Mykolas Biržiška and their works, many important pieces of literature were published during this period of Tsarship.

Later on during the 20th century, as the soviet occupation continued after the war, the language was again put to shadow by Russian influences, but continued to be spoken during the everyday.

It’s difficult to say what the future really holds for the Lithuanian language since it’s becoming a part of an increasingly global picture of languages.

We’ve already mentioned the importance of copywriting in Lithuanian language these days, since the niche of digital business seems to be ever growing.

It’s very likely that the language will take on an important role of being the means of promoting products and services for the Lithuanian market in the near future.

In this article, we’ve talked about the history of the Lithuanian language. One of the oldest in history, it’s development story is definitely fascinating and it’s very likely that it will continue to have prominence in many aspects of Lithuanian life.